The Ongoing Pathologization of the Life and Art of Louis Wain 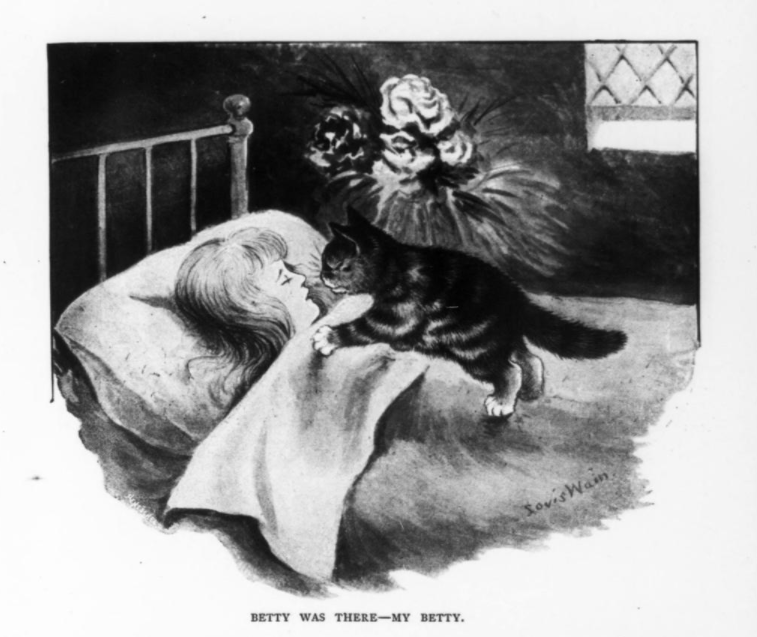 In this poignant illustration by Louis Wain, a small, concerned kitten crawls atop its sleeping owner, five-year-old Betty. A vase of blooming roses overlooks the pair. The drawing is one of nine pictures accompanying Frances Hodgson Burnett’s short story “Little Betty’s Kitten Tells Her Tale.” This story follows Betty’s kitten as it narrates how they met and became inseparable friends only for Betty to disappear one day. The kitten laments never knowing what happened to Betty or where she went, especially mourning the fact that Betty never got to see the white roses bloom on the much-loved bush in the garden. Though the poor kitten does not know where Betty went, it is clear to readers that the young girl has died, making the story all the more heart-wrenching. The English Illustrated Magazine published this short story in 1894 in a special Christmas issue. However, Burnett’s story also appeared that same year in the American magazine The Outlook and was included in her anthologies Piccino And Other Child Stories (US) and The Captain’s Youngest, Piccino, and Other Child Stories (UK). Wain’s detailed illustrations appeared only in The English Illustrated Magazine’s version.

At the point in the story in which this illustration is located, the kitten has not seen Betty for days. The last time it saw Betty, the child had fallen asleep in the garden under the white rosebush and was carried inside by her father (Burnett 9). The kitten tries and fails many times to get into the house to find Betty, though Betty’s parents always put it back outside due to its loud yowling. However, according to the kitten, “one morning, the white rose-bush was so splendid that I made one desperate effort. I went to the bedroom door and rubbed against it and called with all my strength” (Burnett 10). Betty’s mother opens the door and decides to bring the kitten to Betty because her mother thinks she might wake if she recognizes her beloved kitten. When the loving pet is at last reunited with the girl it so adores, the kitten says: “It seemed as if I felt myself lose my senses. My Betty! I kissed her, and kissed her, and kissed her! I rubbed her little hands, her cheeks, her curls, I kissed her and purred and cried” (Burnett 10). This heartbreaking moment is what Wain illustrated in this image. Unfortunately, of course, Betty does not wake, and, according to the kitten, she “went away” shortly thereafter, and the kitten never saw her again (Burnett 11). Wain captures the emotion of this scene through his depiction of the kitten pawing at the unconscious little girl.

Wain’s drawings of cats and kittens earned him both notoriety in his own time and lasting fame. His large-eyed depictions of cats and kittens wearing human clothes and performing mundane human activities charmed Edwardian and modern audiences alike. Given the popularity of his cat and kitten illustrations at the time of the story’s publication, it makes sense that his art accompanied Burnett’s story. However, despite the whimsy and innocence of his drawings, Wain lived a fairly troubled life. Withheld from school until age ten due to his “hare lip,” which would today be called a cleft palate, Wain, as the only son, had to assume the role of man of the house upon his father’s death and provide for his mother and five sisters. Wain caused a scandal after marrying his sisters’ governess, though their marital bliss was short-lived; his wife died of breast cancer three years after their marriage. It was during his wife’s illness that he realized he could earn a living from his art, as she encouraged him to submit his drawings of their cat Peter that he had created to cheer her up during her convalescence. With little business sense and a generous nature, Wain struggled to provide for his family and drew prolifically to keep the family afloat. His financial struggles and the deaths of two sisters preceded a mental breakdown in 1924 that resulted in his being institutionalized for the rest of his life, though scholars disagree over his diagnosis; some suggest he had schizophrenia, Autism, or even toxoplasmosis (McGennis 27; Fitzgerald 101; Moody). Wain continued to draw his favorite subject for the remainder of his life, as the asylum also housed a colony of cats that seemed to bring him great peace.

Moody, Paul. “The Forgotten Artist Who Changed the Way We Look at Cats.” Another Man, 18 Oct. 2018, www.anothermanmag.com/life-culture/10560/the-forgotten-artist-who-changed-the-way-we-look-at-cats-louis-wain.