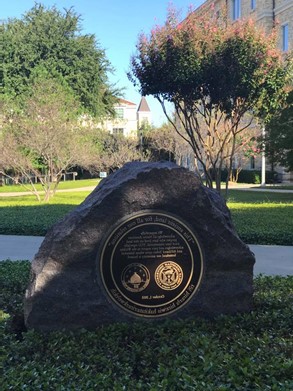 A key statement on the monument notes: “This ancient land, for all our relations,” also stated in Wichita: “ti?i hira:r?a hira:wis hakitata:rira:rkwe?ekih.” This phrase reflects that all living beings inhabiting this land—humans, animals, birds, insects, fish, plants, rocks, rivers, and all else—are connected and related. The Wichita and Affiliated Tribes, as well as other Native Americans, have been living in the region now known as north Texas for hundreds of years, and their ancestors for much longer than that. Through their ancient connection to this land, these peoples developed ways of living here in a positive, beneficial, and respectful manner. This acknowledgment honors their success in living with this ancient land and puts our knowledge—the knowledge produced and learned at TCU— in the context of this ancient land.

TCU is founded on the traditional and unceded territories of the Wichita and Affiliated Tribes.1We would like to thank Scott Langston (TCU Department of Religion) and Renee Gokey (Enrolled Eastern Shawnee of Oklahoma; Sac-n-Fox and Myaamia) for providing feedback on an early draft of this Land Acknowledgment.2 Native tribes who have inhabited the land on which Texas Christian University is built include but are not limited to: the Kickapoo (Kiikaapoi), Jumanos, Tawakoni, Wichita, Keechi, Waco, Kiowa, Caddo, and Comanche tribes. “Native Governance Center,” “Native Land” Native peoples from these and other tribes have lived in these lands and across Texas since time immemorial and in the present day. This website is affiliated with the Texas Christian University Library and the Department of English. It is important that we recognize the Native American and Indigenous peoples and tribes on whose land Texas Christian University is located.

Teacher-scholars working in transatlantic studies have a clear responsibility, as a field, to combat the legacies of colonialism. The processes of colonization, genocide, and enslavement are inherently transatlantic. We recognize the deep implication of transatlanticism in both the historical and contemporary effects of colonial violence and knowledge production. It is our hope that Teaching Transatlanticism troubles, rather than reinforces, the ways in which scholarly disciplines perpetuate colonialist practices.5Zuroski, Eugenia, ‘The Ship We’re In’, The Rambling, August 7, 2020. We strongly encourage readers of Teaching Transatlanticism to use resources like nativegov.org to help them learn more about the Indigenous tribes/peoples who live(d) on the land(s) they are reading about since these peoples often tend not to be mentioned directly, if at all.

We acknowledge that our work is situated on colonized Indigenous land whose resources have been extracted through enslaved and indentured labor. This is rooted in Western understandings of land as inert, only containing resources available for commodification. This understanding oppresses the land itself by denying other forms of relationship between the land, other living beings, and humans. The inequalities of these oppressive systems persist to this day in the erasure of the labor, often that of people of color, which is integral to the maintenance, development, and support of digital projects such as this one.6Fyfe, Paul, ‘An Archaeology of Victorian Newspapers’, Victorian Periodicals Review 49.4 (2016), 546-577.

Although digital projects can create the impression that they are somehow detached from environmental impact, we are aware that the infrastructure necessary for hosting a website has direct, material, and often detrimental effects on the Earth. We wish to offer our thanks to the lands where some of this infrastructure is located, including the TCU data center located in Fort Worth, Texas, the ancestral lands of the Wichita and Affiliated Tribes; the WordPress headquarters in San Francisco, California, on the traditional and unceded lands of the Ramaytushg, Ohlone, and Muwekma tribes, and the WordPress data centers located around the globe.

“What to Consider When Acknowledging You Are On Stolen Indigenous Lands.” Healing Minnesota Stories.